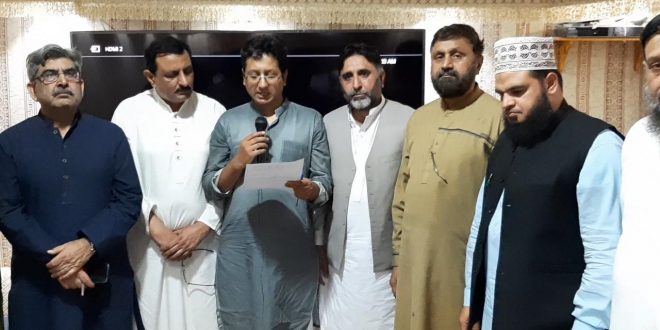 An All parties conference of Pakistani political, social and literary organizations in the Saudi capital of Riyadh were held by the Majlis-e-Pakistan to discuss Kashmir issue & to show solidarity with the Kashmiri people and to take a firm stand on the Kashmir issue.

Speaking on the occasion, President of the Majlis-e-Pakistan, Rana Abdul Rauf has said, “the purpose of the conference is to send a message to the government of Pakistan that we are one for the Kashmir cause. We need to keep the momentum of the Kashmir issue until it is resolved. It is now more than forty days of curfew and lockdown situation in Kashmir imposed by the Indian forces. We demand the world to pay attention to the human rights violation by the Indian forces and resolve the issue before its too late”, he said.
Khalid Akram Rana mentioned the sensitivity of the Kashmir issue, “The regional stability is in extreme danger that will affect the entire world, the world should not be silent by now as the two major nuclear powers are face to face on Kashmir Issue, experts estimate a nuclear war between India and Pakistan could eventually lead to the death of nearly a quarter of the world’s population. Modi’s racist government is spreading Hindu extremism that is in progress with the worst crimes and violations of human rights. Kashmir is the Jugular vein of Pakistan and any threat to our life cannot be granted”, Rana said.
Mohammad Asghar Qureshi has said, “All parties must need to be united for the Kashmir cause.  our politicians suppose to have to take serious action at the floor of the parliament but sadly to say that at the parliamentary session there was no seriousness were shown from the parties on Kashmir issue”, Qureshi said.
Haji Ehsan Danish has shown his satisfaction on Pakistan, “We as Kashmiris are very satisfied that Pakistan is intelligently and successfully fighting the case of Kashmir and the Pakistani peoples are with us, Our heart beats with Pakistan and we belong to Pakistan. I believe that the day is not far when the Kashmir will become part of Pakistan”, Danish said.
Muhammad Riaz Rathore Has demanded that the Pakistani foreign policy should be revised and a meeting of Pakistani Ambassadors from all over the world shall be called immediately to discuss and to adopt a new strategy. “There is no other opinion on the Kashmir issue that we stand with the Kashmiris, and we want the Kashmiris to be given their right of self-determination so that they can decide their fate on their own. Our duty is to highlight the violations and the atrocities in Kashmir as much as possible and to reveal India’s crooked face to the world.
Waqar Naseem Wamiq reads out the message of the Pakistani Ambassador Raja Ali Ejaz who were on his urgent trip to Jeddah to attend the OIC meeting, “Kashmir cause must be highlighted on every platform and it is a great gesture being shown by the Pakistani community”, He stated.
A joint statement of the APC by Majlis-e-Pakistan was issued and read on the occasion by Ehsan Abbasi that demands Prime Minister Imran Khan to take confidence of all Pakistani political parties before his upcoming crucial address at the United Nations, the joint statement further demands to All Parties to support the government in solidarity with Kashmir.
The proceedings of the APC were ably conducted by Hafiz Abdul Waheed. Other noted persons present on the occasion were Prof. Dr. Mahmood Ahmed Bajwa, Makhdoom Amin Tajir, Khalid Rana, Mian Abdul Hamid, Shaikh Asrar Ahmed, Omer Farooq Khan, Arshad Shaikh, Iqbal Wadood, Sarwar Khan, Hanif Babar and many others.

Dubai – November 2022: As part of its CSR initiatives, LEGOLAND®️ Hotel, part of LEGOLAND®️ …