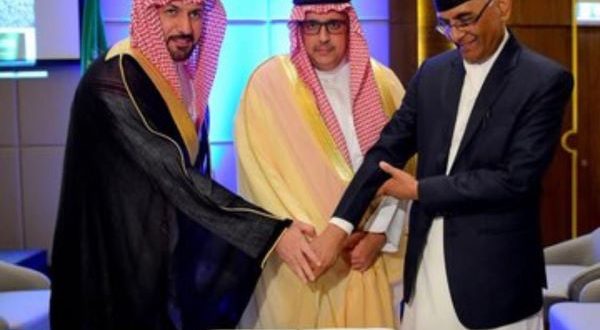 Nepali Embassy Celebrates the National Day of Nepal in Riyadh

Embassy of Nepal in Riyadh hosted a reception at Marriott Hotel in the Diplomatic Quarter to celebrate the National Day (Constitution Day) of Nepal on 22 September 2019.

Welcoming the guests, Ambassador of Nepal to the Kingdom of Saudi Arabia, H. E. Prof. Dr. Mahendra Prasad Singh Rajput briefly highlighted some salient features of the Constitution of Nepal and shed light on the priorities of current Government towards achieving economic development and prosperity in the country.

Expressing satisfaction over the excellent state of bilateral relations between Nepal and the Kingdom, HE the Ambassador said the relations have further been strengthened by Nepali migrant workers in the Kingdom, Nepali Hajj Pilgrims for the Two Holy Mosques of Mecca and Madina and Nepali students studying under Saudi Scholarships. HE the Ambassador also highlighted some potential areas to further promote tourism, trade, investment for the mutual benefit of the two countries. The programme was started with the national anthems of the Kingdom of Saudi Arabia and Nepal. A celebration cake was cut by the chief guest and HE the ambassador.

Apprising Nepal as one of the most preferred holiday destinations for foreigners, HE the ambassador stressed on importance of the decision of the Government of Nepal to observe the year 2020 as Visit Nepal Year and encouraged travel entrepreneurs to help promote Nepal’s tourism. His Excellency also advised Nepali diaspora to make efforts to send tourists to Nepal in 2020.

A documentary video covering natural landscapes, cultural heritages, floras and faunas was screened throughout the programme. Dozens of tourism promotional materials, flash banners, were displayed on many TV screens during the programme. Varieties packets of Nepali tea and tourism promotional materials were distributed to the guests as souvenirs at the end of programme. Earlier, in the morning of 20th September, the Embassy organized a flag hoisting ceremony at its premises. Embassy premises was decorated with large number of national flags and the chancery was illuminated with colourful lights for three days to observe the National Day